Nano, macro, micro, mega? If you are familiar with influencer marketing, you have probably seen these terms. But what exactly do they mean? And which type of influencer is most suitable for your purpose? In this article we tell you more about the different types of influencers and how you can best use them. 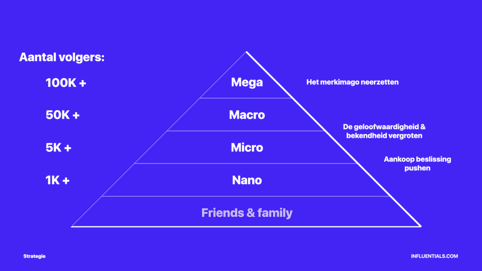 To get a good idea of the different types of influencers, we take a look at the influencer pyramid.

At the top of the pyramid you will find the mega influencers. These are influencers that you can determine that they have celebrity status. With more than 100,000 followers, they are ideal to bind a certain image to your brand. An example of this is Doutzen Kroes for lingerie brand Hunkemöller. You often see brands and mega influencers entering into partnerships where the influencer is immediately involved in the design of the product itself. The product launch is followed by a major campaign in which the emphasis is also placed on the influencer himself. That is why these types of influencers are the most expensive influencers to work with.

Despite their wide reach, mega influencers are often further away from their individual followers (especially if you compare this with nano/micro influencers). This is reflected in the low engagement rate. Also among the followers themselves, you see many different differences in the field of demographic and psychographic factors.

Influencers who have a reach of at least 50,000 followers fall under the macro category. Their content is often of higher quality and they are closer to their followers compared to mega influencers. Macro influencers owe their popularity to the internet itself, for example by making vlogs and posting funny and inspiring content that was received very well a few times and then continued with it.

If you are looking for a specific target group, but still want to generate a lot of reach, using macro influencers is a good solution. In addition, they also contribute well to increasing the credibility and awareness of your brand. You will also have to count on a financial compensation of a few hundred euros for macro influencers.

Micro influencers have a reach between 5,000 and 50,000 and are therefore in a diverse pool of different types of influencers. For example, you often see niches among micro influencers because they focus on a certain theme or topic. With this you can almost see them as experts or specialists and explains the large number of followers. The followers get inspiration and sincere advice and tips from micro influencers. Despite not having celebrity status like macro and mega influencers, brands can trust that their followers are interested in everything the micro influencers share with them.

You also more often see a high engagement rate percentage with micro influencers, because the interaction between the influencer and the followers is very high.

An advantage compared to macro and mega influencers is that the costs are lower for collaborations, but you can still realize high-quality content and a large reach.

Nano influencers have a range between 1,000 and 5,000 and are located at the bottom of the pyramid. These content creators are still fairly new to the world of influencer marketing, but can still be very valuable to your brand. These influencers often have great influence in his or her own community, city or neighborhood and therefore have a strong engagement rate.

For example, nano influencers are a good option to create user-generated content and they can promote products and services in an authentic way because they are so close to their community. The disadvantage, however, is that you will not see great results in terms of reach when working with nano influencers. Do you want to promote a new lipstick and create an oil slick on Instagram or announce a local activation? Then it is best to use nano influencers for this.

All in all, it is important for you, as a brand, to determine which goals you want to achieve with your influencer marketing campaign. Keep in mind that the greater the reach, the lower the focus will be on the product or service and your budget should be higher.

For example, look at a Kylie Jenner or other instagram celebrities promoting green tea. These types of products have a broad appeal rather than something very specific. As a result, general products such as a green simple green slimming tea are better suited to celebrities and larger influencers compared to small niche influencers. If you have a product or service for a specific target group as a brand, it is better to consider working with micro or nano influencers because of their 'narrow' target group.

Do you have any questions about the different types of influencers? Don't hesitate and send them to layla@influentials.com